I recently visited the Denali National Park and Reserve. Denali is the highest mountain peak in North America at 20,310 feet. It’s located in Alaska. The mountain was first named McKinley in 1896 for President W. McKinley, but the original Athabascan name was Denali. The Alaskan Board changed the name back to Denali, but it wasn’t until 2015 that the federal government adopted the change, thus you may hear it called by either name. Denali dominates the mountain range and is visible on a clear day. However, it is frequently swathed in clouds. I was lucky when I visited the area that the weather was good. I had expected rain or cold weather. The day I had arrived, it was 87 degrees. With the heat, it kept the wildlife from view.

Visitors can access the park by vehicle, bus tour, or by railroad. Lucky visitors can see grizzly bears, moose, caribou, and Dall sheep. I did see a caribou crouching in a dry riverbed, yet it was too far away to get a great picture. I did get pictures of the Alaskan state bird, Tarmagon. It’s nickname is chicken. It is similar to a grouse and is found in bushes and long grass. Another animal is the red tree squirrel. It’s small compared to the gray squirrel. They are fast-moving creatures. I tried several times to get a picture of the little buggars. They are cute and are about the size of a chipmunk. I found it fascinating that they collect mushrooms and place them on the branches of black spruce trees to dry, before storing them.

So if you visit Alaska, do visit Denali. The scenery is beautiful. 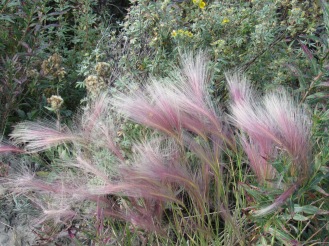 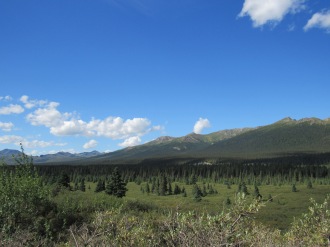